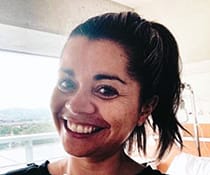 I do not know for how long I had primary aldosteronism. Looking back, I would say that at least the last 2 years I had felt extremely tired. My weekends would literally go to regain energy and I had headaches a few times per month but never thought it was anything else than normal stress. What I know is that I was constantly tired and low on energy. I always thought it was because of work. I never suspected I had a health issue. I had never been diagnosed with any disease in my life and I only saw my doctor if I had a flu or something mild like that, so I felt very healthy until that point.

Initially, she assumed it was hereditary since both my parents suffer from high blood pressure, but genetic testing was never offered to me. My blood pressure did not improve after weeks of taking the antihypertensives, so she increased the dosage to see if it would help. It didn’t, so she ordered blood tests, and realized that my potassium level was very low. Potassium supplements (2 tablets 3 times every day) were immediately added to my medications.

Since neither the potassium supplements nor increasing the dosage of my blood pressure medications were making any difference, my primary care physician suspected something else was wrong, and she referred me to an endocrinologist. This took an additional two months.

My primary care physician also looked at my full wellbeing, and sent me to a therapist to help me handle the psychological aspects of these difficult times I was going through. Since she had noticed that work was aggravating my blood pressure, she kept me on sick leave.

Soon after, I developed heart palpitations and anxiety. After an episode of these, my primary care physician ran another ECG which, this time, showed abnormalities, so I was sent to the emergency department where additional testing was done. Nothing abnormal was found and I was again sent home with no answer.

At my first appointment with the endocrinologist, my records were reviewed and more blood tests were ordered. I’m unsure, but I assume one of them was an aldosterone renin ratio because it was sent to another city for analysis.

Next, I underwent a saline test. It is unclear to me whether the test was done correctly because my medications were only withdrawn the day before the test. Since the results did not show an overproduction of aldosterone, the physician thought there was maybe something wrong with my kidneys. It was really tough because it felt like we were starting all over again with other possible theories and diagnoses. Again, I’m unsure of how my renin was measured. Very little was explained to me, and at that point I did not know where to look to inform myself. I was just bouncing from one test to another, and trusting that people were doing the right thing.

As a next step, the endocrinologist decided to do a 24-hour urine test but it turned out to be inconclusive, and I had to do it again. The second test finally showed a clear overproduction of aldosterone.

Then I was asked to get an MRI scan which showed a tumor on my left adrenal gland, and I was told that the best option for me would be surgery to remove it.

By the time I was scheduled to meet the surgeon, I was concerned I might not be getting the appropriate care, and I started to look for ways to understand things on my own. I found the Conn’s Syndrome group on Facebook, and finally got the information I needed. I realized that before surgery, patients must undergo adrenal venous sampling (AVS), something my physicians had never mentioned to me. Instead, I had been told that expertise was lacking in this area in Switzerland, that my doctors were almost sure that the tumor was causing the problem, and that I should go straight to surgery.

The first time I met my surgeon, I mentioned the AVS. Instead of proceeding immediately with surgery, he agreed to book me with a radiologist to perform the test. Results were not 100% conclusive, but I was again told that they suspected overproduction on the left side where the tumor was. I was then asked whether I wanted to repeat the AVS or go to surgery. At that point, I had been dealing with doctors for eight months, and I just wanted to have a solution. I trusted the results my physicians had, and I booked the surgery.

My surgeon only removed the tumor, and kept my adrenal gland almost intact. I have 80% of it left. It was a laparoscopic surgery. They stopped all my medications immediately. At first my blood pressure dropped very low, and then after two days it started increasing again so I was given an antihypertensive again. I stayed four days in the hospital.

After a month, my blood pressure was completely normal, my doctors declared me healthy, and told me I didn’t need to see them anymore unless I had symptoms.

It has been six months since surgery, and I feel so much better now. I occasionally still get anxiety in some stressful situations, but nothing like before the surgery. I’m still going to psychotherapy since my coach has been a great support. Considering all that I have been through, I didn’t want to stop it too soon even though I feel much stronger and much more energized than before.

Compared with the patients I met online, it looks as if I received diagnosis and treatment without having to wait too long. Because of the COVID-19 pandemic, some of my appointments took a long time to schedule. Even if it felt like an eternity, and it was incredibly consuming and emotionally disturbing to do so many tests, to meet doctors almost weekly, and to go back and forth being so sick but not knowing what the issues were, I’m thankful everything was done in a year.

I believe it is important for patients to keep themselves informed. There isn’t much available to understand the disease. Even medical specialists don’t seem to know exactly what to do and which steps to take. I am still not 100% sure if everything was done properly for me. All I know is that I feel so much better now than before. I am not sure why urine tests are not immediately done when someone has blood pressure problems. It would seem to be a more reliable way to look for the problem. Had my doctors stopped at the saline test, I would have never been diagnosed with primary aldosteronism, and more importantly I would have never had surgery.