Surgical treatment offers significant improvement, if not complete resolution of symptoms, in 35% of patients affected by primary aldosteronism. In the remaining 65%, medical therapy helps mitigate the damage caused by excess aldosterone. Yet, 95% of those affected are never diagnosed or treated. Regardless of the limitations of current diagnosis and treatment modalities, appropriate management of the disease calls for an appropriate framing of the problem: excess aldosterone is a major public health issue. 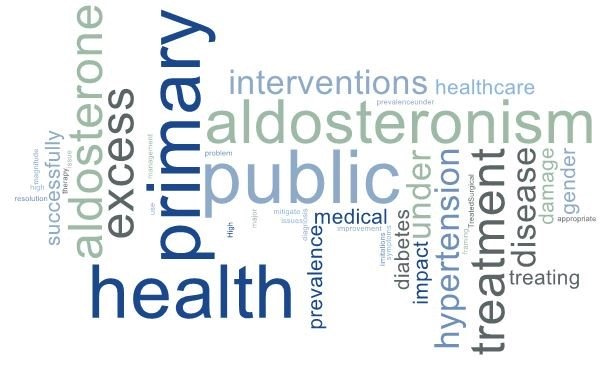 Under-use of available means is compounded by high prevalence: up to 40 million people in the US and a billion worldwide. Medical issues of this magnitude are, by definition, public health issues. Their resolution requires concerted efforts only public health agencies can successfully deploy and monitor.

Excess aldosterone is associated with at least a dozen other diseases, some of which are fatal. By mitigating conditions such as diabetes and chronic heart failure, timely treatment of primary aldosteronism is de facto a preventative public health measure. More importantly, since it is now known that excess aldosterone is actually a primary cause of hypertension, treating hyperaldosteronism helps adequately address another major public health issue – essential hypertension.

Despite being well-known, the role of dietary sodium in hypertension is not systematically emphasized. The cardiovascular damage of excess aldosterone is largely driven by inappropriate levels of sodium. Public health interventions are needed not only to promote healthy choices, but to make them the easiest choices. Successfully addressing the importance of dietary sodium requires interventions on a scale comparable to that of smoking cessation measures.

Not only are African Americans at higher risk of developing hypertension, they are more likely to develop primary aldosteronism. Yet, they receive poorer healthcare, and are largely underrepresented in clinical trials. The impact of gender on the disease is equally critical. For example, when present during pregnancy, it causes maternal and fetal complications. These factors remain largely overlooked, and warrant proper interventions at the public health level.

The wider socio-economic costs of under-treating primary aldosteronism are as damaging as its distressing impact on individuals, families, and communities. Adrenal venous sampling and adrenalectomies may come at a price for healthcare systems, and while more affordable, medical treatment is less effective. However, when taking prevalence and burden of disease into consideration, the financial consequences of under-treating primary aldosteronism far exceed those of available options. In the US alone, the cost of cardiovascular disease was estimated at $363 billion from 2016 to 2017, and the total cost of diabetes reached $327 billion in 2017.