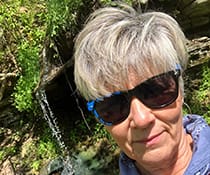 I’ve experienced extreme anxiety most of my life. It started when I was 7 years old. I was in second grade. For as long as I can remember, I’ve also had chronic digestive and bowel problems.

In my thirties, I started to experience episodes of muscle pain and spasms, predominantly in my lower back down to my hips. It would be particularly bad after a long day of hard work. These were frequent as we lived on a farm. There were many trips to the chiropractor, as the sustained rigidity would eventually pull my back out of alignment.

In 1998, at 41 years of age, my blood pressure began to rise. By 2001, I was in the 140/90 range. My primary care physician was concerned, and insisted we try medications. These began with hydrochlorothiazide (HCTZ), a regular diuretic. It caused muscle spasms and muscle pain to become worse. To this were added various classes of antihypertensives, in combination with HCTZ or alone. None effectively controlled my blood pressure. A beta blocker was also added, but really made no difference.

The side effects from these medications were very bothersome, and ranged from constant cold and flu-like symptoms, to joint/bone/spine pain, chest pain, lethargy and insomnia. The beta blocker caused nightmares in living color, which I did not attribute to the drug until after I stopped it. The nightmares disappeared and I looked up side effects. Well, what do you know!

Because of the lack of response and severe side effects, my primary care physician referred me to a cardiologist, and I was put on yet another blood pressure medication. Within 24 hours, I broke out in hives, and reported it to the doctor’s office. I was yelled at, accused of making things up and of not wanting to take my medications. Needless to say, I never saw the cardiologist again.

By 2010, sick of side effects and poor blood pressure control, I gave up on medications. In 2013, I wound up in the Emergency Room (ER) for what appeared to be a heart attack. To me, it felt like an intense spasm that started in my diaphragm, went straight up the middle of my chest/esophagus to the back of my throat and base of my skull. It then spread across my shoulders. I nearly passed out from the pain. All heart tests came back clear. The only thing they found was dangerously low potassium.

In the week prior, I’d experienced numbness and tingling in my extremities and face, along with spasms in my low back and calves.

They gave me liquid potassium to drink, and sent me home with orders to monitor it. Initially, I was able to keep levels up using diet and over-the-counter supplements, but the need for potassium kept increasing just to stay in the barely-normal range.

By 2018, I started noticing crazy heartbeats, and realized that my blood pressure had hit critical mass. It was running 188/125. I was struggling to keep potassium levels up. I googled high blood pressure with low potassium. Bingo! Conn’s Syndrome! I took the information to my primary care physician who then referred me to an endocrinologist.

Also, while Googling, I discovered an online support group run by a physician (Dr. Grim). I began transitioning to a low sodium/high potassium diet, and started learning all I could about the disorder.

I asked the endocrinologist to test me for Conn’s Syndrome, but was told that even if I had it, there was only medical management, and I was offered to try more drugs instead. After a few weeks of a calcium channel blocker, resting chest pain crept in, eventually getting so bad I thought I needed a trip to the ER. When I reported the side effect, I was told again that it was all in my head and I didn’t want to take the medication, and I was shipped off to a cardiologist. I underwent a stress test which had to be stopped after I experienced a horrible reaction to the contrast. I then got a nuclear stress test that cleared my heart.

The endocrinologist eventually ran an aldosterone/renin ratio (ARR), and did a CT scan of my adrenal glands. Although the ARR was high, I was told that the adrenals were “normal.” I was started on yet another calcium channel blocker which did nothing. Then we added the mineralocorticoid blocker, spironolactone. I had a brief respite from high blood pressure that came down to 118/80, but side effects eventually kicked in. I was then switched to Eplerenone, only to see my blood pressure increase again.

Recalling the behavior of this endocrinologist is very distressing to me. In so many words he said I was bringing the side effects on myself, and that I was crazy. He would not reveal the ARR results to me, and I had to bring my husband to an appointment for him to admit that I likely had Primary Aldosteronism.

In July 2020, I was finally able to see a physician knowledgeable about Conn’s Syndrome. I went to the Mayo Clinic in Rochester, MN. Using the same CT scan of my adrenal glands ordered by my local endocrinologist, experts at the Mayo Clinic explained to me that my left adrenal gland is 2/3rd greater it’s normal size, and that there is a tumor on my right gland. I underwent adrenal venous sampling seamlessly and with no ill effects, and was given the final diagnosis of bilateral disease.

I have to say it made a tremendous difference to be treated so very well by Professor William Young and the staff at the Mayo Clinic. They reassured me that a great many people are drug intolerant, and that people like me are not as “rare” as some lead us to believe.

At the Mayo Clinic, I was advised to keep my potassium up, to continue a trial and error of medications to try to lower my blood pressure, and essentially, to use whatever works for me. I was referred back to my primary care physician. That’s pretty much all there is for me in terms of treatment.

It has been over a year since diagnosis at the Mayo Clinic. I have further restricted my sodium intake to less than 1,000 mg daily, and I try to keep my dietary potassium around 4,700 mg. This is not enough to keep my potassium at 4.5 which is where I have the most relief from pain symptoms. I also have to take 20 mEq extended-release potassium every 6 hours. I have to take these with a food enzyme so they don’t go through me undigested. Low-sodium diet and potassium supplementation have brought my blood pressure into the 150-60/90-100 range. It’s nowhere near normal, although it is proof one can get blood pressure down that way.

Quality of life has improved with the diet. However, there are good times and bad. I have bouts of extreme pain that not much helps. I’m in physical therapy for my right shoulder. My left bicep muscle has torn from persistent tetany. There are spells of anxiety and nervous perspiration that nothing will calm. I wake up at night feeling like my insides are vibrating. For the most part, I’m down to one or two bathroom trips a night instead of as many as 8.

I love yard work and flower gardening. I’ve had to greatly modify how I go about it in order to sustain potassium levels and not go into crazy heart rhythms.

My primary care physician continues to recommend drugs to try. I recently tried another, and can’t remember the name of it, but I got absolutely no sleep. For now, I’m taking a side-effect break. What my outcome will be, I have no idea, but the prognosis is not good.

A month before going to the Mayo Clinic for diagnosis, upon awakening one morning, I noticed pressure and blurred peripheral vision in my left eye. At first it improved as the day went on. As the days passed, the blur spread to the center vision and would not go away. I called my optometrist, who saw me promptly. He explained there was blood and swelling in the retina, and referred me as an emergency to an eye specialist. However, due to COVID-19 and long ER waits, I was told it was safer for me to go to a different clinic the following week. It was determined that I’d suffered a Central Retinal Vein Occlusion (CRVO) probably brought on by unresolved hypertension I’d been experiencing for decades. There is no way to dissolve the clot, and remaining vision can only be sustained with very painful injections to the eye. Initially the injections were every 4 weeks. I’ve now reached 7 weeks before vision begins to fail. This is for the rest of my life. Courtesy of lack of PA diagnosis and treatment! I am forever thankful for the eye specialist. I call her “the good eye doctor” (her name is Dr. Monique Leys). She immediately knew what was going on, she saved whatever was salvageable of my eye, and she’s determined to do whatever she can to help me.

Currently, I live with my husband in North-Central West Virginia. We will be moving to Florida in the spring. There is a Mayo Clinic nearby. I am working on referrals to their endocrine-hypertension department. I hope to do my primary care there also. Maybe they’ll be able to improve the outcome for me, before I blow a gasket. Ha!