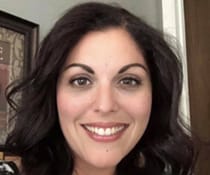 As a teenager, I suffered with symptoms of low potassium (not knowing at the time that primary aldosteronism (PA) was the cause) and associated very high uncontrolled blood pressure. My primary care physician (PCP) kept giving me potassium at checkups, telling me it’s low but never following up or connecting it to anything.

When I was in grad school, I was diagnosed with anxiety at an ER visit for elevated heartrate, difficulty breathing, and stomach issues. I thought I was having a heart attack. My blood pressure was 165/110. I was given every possible blood pressure medicine by my cardiologist, but my diastolic pressure wouldn’t lower and I did not feel well on the prescribed drugs.

I visited the ER several more times with heart palpitations, extremely high blood pressure and even what felt like panic attacks that I had never experienced before. I had extensive testing from an endocrinologist. I was tested for Cushing’s and every other disease suggested to me by family and by physicians trying to find an answer. I couldn’t sleep. My body thought bedtime was “get up time.” I urinated several times in the night, resulting in no sleep at all for me. I would get headaches and go through days of debilitating fatigue. I also discovered that I had early onset cataract.

In 2017, about ten years after the onset of my first symptoms, I was researching on my own one day, as I often did, and realized I might have PA. I asked to be tested for it and was told: “we are looking for the horse, not the zebra” and “it is highly unlikely you have this.” The doctor ordered a CT scan, which showed an enlarged left adrenal gland (hyperplasia). He also ordered 24-hour urine testing, aldosterone and renin testing, and other bloodwork. This was followed by two rounds of adrenal venous sampling (AVS). The first AVS was unsuccessful accessing the right adrenal gland. With the second AVS, I was told it was one of the worst bilateral cases they had seen. Both of these procedures were four hours in duration, done at two different medical centers in the US Midwest where I live. I was formally diagnosed with PA.

To better manage my care, I decided to find the best doctor reasonably near me, a well- known physician and professor at the University of Chicago Medical Center. After diagnosis, I was started on Spironolactone. The dosage was later adjusted as bloodwork was tested periodically.

I wanted to get pregnant, and so I tried being off Spironolactone during that time (about a year).  I became sicker, so my physician and I decided it was unsafe to be off medications any longer. I also discovered that I had PCOS and was reproductively challenged due to this disease. I went back on Spironolactone.

With a scare of potential kidney damage from PA and its medical treatment, I decided to join a research study at the Mayo Clinic and have AVS done again there (only a 15-minute procedure this time). The results from the 3rd AVS, performed at the Mayo Clinic in 2021, confirmed my bilateral diagnosis. I’m not a surgical candidate and I’m going to be on medications forever.

I am now on 150mg of Spironolactone. Quality of life now is dramatically better for me. I sleep better and magnesium supplementation has been very helpful with my sleep. I avoid alcohol and high sodium foods. My potassium level sits at 4.5, a good place for me and how I feel. I feel well-controlled, but some days it is still a struggle, not only physically but emotionally as well, and my stomach issues continue. If something stressful happens, my adrenaline increases and I feel very “hyped up.” I have to closely manage stress by avoiding those difficult situations as much as possible. PA is a “silent disease,” as it took doctors what feels like my whole life to find it. I don’t think as much damage would have been done to my body if it had been diagnosed ten years earlier when I first had symptoms. It has taken so much from me, but I now make a choice every day to live the best life I can. Stay strong!