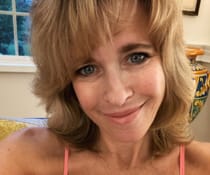 My name is Jenny and I am currently 50 years young. I began having high blood pressure (HBP) in my mid-30’s, for no apparent reason. I did not smoke, was not overweight, do not drink a lot of alcohol and I worked out regularly. I was prescribed various blood pressure medications that did nothing. I asked doctors multiple times if there could be an underlying cause and was told “no.”

I stopped medications for a long time, except a small dose of a water pill which helped a bit and made tons of lifestyle changes – I tried everything imaginable that claimed to lower blood pressure over the years. None of the natural treatments made a difference.

In my 40’s, I began to have periods of extreme weakness where I felt I was going to pass out and it was determined it was from low potassium. I continued to feel worse and tried to manage it the best I could. I was still able to work and luckily my job allowed me to take time off when needed. There were multiple instances when I almost passed out after pushing myself during long hikes. I did not know what was happening at the time, but I did learn that drinking something with electrolytes made me feel better. There were many scary situations like this that I now know were related to my illness. I was truly lucky that something more serious did not happen.

After my mother-in-law suffered multiple strokes and had experienced high blood pressure, I decided it was time to be proactive. I was 48. I googled “underlying causes of high blood pressure.” The first condition that popped up was Conn’s Syndrome (or “PA,” primary aldosteronism). I saw phrases such as “does not respond to most blood pressure lowering medications or lifestyle changes” and “can begin at a young age with no risk factors” and “can be accompanied by low potassium.” I thought I was reading something written about me!

I asked my doctor for the screening test; this was done and it came back positive. They sent me to an endocrinologist who did not treat a lot of PA, but he had attended a talk on the topic at one of his endocrinology conferences. He consulted with other endocrinologists and made sure I was diagnosed properly.

Thanks to the Facebook community I belonged to on the topic, I knew the horror stories of testing not done correctly. For my saline infusion test, they actually had me stay in the hospital for the night to ensure my potassium was high enough for the test, and as it turns out it was incredibly low so they were able to raise it prior to the test. This confirmed my diagnosis, after 13 years of unexplained high blood pressure. I stayed in the hospital for the test about 3-4 days before the hospital was shut down to most procedures because of COVID-19 in mid-March 2020. Normally, I would think someone would be sad to receive a diagnosis of a serious condition. However, I was so happy and relieved to finally have an answer! Interestingly, I learned later that my aunt has primary aldosteronism as well. I asked about genetic testing, but the doctors did not seem familiar with it or interested and I did not know how to proceed with it.

Because of the pandemic, I was put on medical treatment until we felt it safe to have a CT scan and adrenal venous sampling (AVS). I was on the medication eplerenone, which caused me to have chronic migraines, although my blood pressure and potassium were normal on it. I also ate a very low sodium diet, per doctor’s instructions. We waited until 2021 and after I was vaccinated, I then had the CT scan. The CT scan showed an adenoma on my left adrenal gland.

I now needed to decide where to have my AVS testing performed. As with the diagnosis, thanks to the Facebook group, I was highly educated and aware of the problems with AVS and the need to have it done with an interventional radiologist who had experience with PA and knew what they are doing. I reached out to Mayo Clinic, but also heard about a successful AVS done at UVA Medical Center in Charlottesville, VA, from a fellow Facebook member. I live 2 hours from UVA and my son attends the school. I made an appointment to discuss the procedure and was very impressed. We scheduled the AVS and I had it done under IV sedation. It was successfully performed and showed I was unilateral and a surgical candidate.

I then had to decide where to have surgery. I met with Dr. Smith at UVA hospital; he is a general surgeon, but specializes in endocrine surgery. My husband and I met with him for an hour. The normal surgical process is to remove the whole gland and that is normally what Dr. Smith would do. However, based on certain factors of my case (including level of aldosterone), it was believed that there was a decent chance my Conn’s was coming from the adenoma seen on the CT scan. Oftentimes, there can be many tiny adenomas or areas of dysplasia that can’t be seen that are also secreting excess aldosterone. As a result, in the United States where I live, the normal course today is to remove the whole gland. Sometimes where the adenoma is located makes a partial surgery not possible. I understood it is also an easier operation to remove the whole gland rather than part of it as, apparently, the adrenal gland is not super easy to cut apart.

Because I was informed, we discussed at length the possibility of a partial vs. a full adrenalectomy. Dr. Smith was hesitant but agreed to do the partial, with my full consent and understanding there was a chance I would have to have the remaining adrenal tissue removed. I gave him permission that if during the surgery he felt it was best to remove the whole gland, he could proceed to do so. He was able to do a partial adrenalectomy in July of 2021, and I still have a little over half of my gland. I spent one night in the hospital after my surgery.

Recovery was challenging, as I am allergic to many pain medications. My doctor seemed to think that because I looked so healthy and was active, I would breeze through it all. I took a solid week off work to feel somewhat recovered and even then, quite a few weeks to actually get back to it. I had low cortisol problems for a while and struggled with dizziness and faintness from hypotension. Ironically, the treatment for low cortisol is steroids and, due to a hip injury, I received a steroid shot from another doctor a few months after my surgery. After that shot, I felt better than ever and my dizziness largely went away. I cannot recommend UVA enough if you live on the east coast. The care was amazing and you can have both the AVS and the surgery done there. My operation was successful and I have been cured.

I am now on no medications and my potassium is normal. My blood pressure is normal. I am 100% cured and although we do not know how much damage was done internally from having primary aldosteronism, both my surgeon and my endocrinologist think I am in pretty good shape. I am doing well!